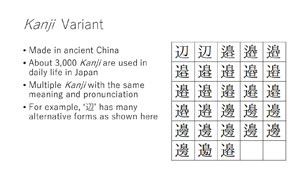 Example of Kanji Variants in the Japanese Language 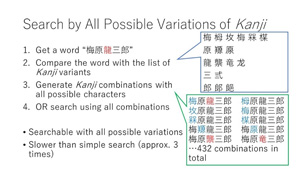 System to Search All Possible Variations through Comprehensive Retrieval

The International Council of Museums (ICOM), created in 1946, is a non-government organization aimed at exchanging and sharing information on museums. The general conference, which is held for all of its International Committees every three years, took place in Kyoto this year. Three staff members from the Cultural Properties Information Section attended the conference to deliver a presentation titled “Two Solutions for Orthographical Variants Problem” at CIDOC, ICOM’s International Committee for Documentation.
One of the features of the Japanese language is its varied orthographic system, under which you use kanji, hiragana and katakana quite differently. However, this system results in creating orthographical variants, such as龍 and竜, as well as藝 and芸, causing search omissions. Focusing on personal names, we reported our own way of coping with all possible variations for the database of our website.
Orthographical variants are not unique to the Japanese language. For example, some systematic solution is required for the English retrieval system if the results of the plural form should also be shown when you perform a search in a singular form. Cultural properties have their universal value although there are some issues originating in locality in their documentation. We would like to consider the universality and locality in cultural properties from the aspect of system infrastructure.

Presentation at “JinMonCom 2018 – Data for Historical and Humanities Research” View of the presentation (KIKKAWA)

On December 2nd, 2018, Hideki KIKKAWA and Tomohiro OYAMADA presented the database of Tokyo National Research Institute for Cultural Properties in the session “Data for Historical and Humanities Research (www.metaresource.jp/2018jmc/)” at the JinMonCom 2018 organized by the IPSJ SIG Computers and the Humanities, one of the research groups of the Information Processing Society of Japan (IPSJ). This session was aimed at introducing databases that are not widely recognized yet in the IPSJ and promoting more active data use. KIKKAWA and OYAMADA presented the system overview of the TOBUNKEN Research Collections (www.tobunken.go.jp/archives/), the database of photographic negatives and plates which is the largest among our image databases, and the database of Art exhibitions and Obituaries which is based on the Year Book of Japanese Art published since 1936.
Additionally, various databases published by the National Diet Library, Shibusawa Eiichi Memorial Foundation, Tokyo National Museum, the University of Tokyo and Aozora Bunko were presented and attracted the attention of the participants. In addition to publishing and managing the database of cultural properties, our Institute will make further efforts to spread the database of cultural properties and make it useful for survey/research.

Use of WordPress for the Cultural Property Database – WordCamp Osaka 2018 Tokyo National Research Institute for Cultural Properties (TNRICP) drastically renewed the cultural property database in 2014 by using WordPress, a content management system. WordPress is an open source system used on a third of the websites in the world now. Its formal event, WordCamp, took place 128 times in 48 countries and regions in 2017 alone. In the Word Camp Osaka 2018 (https://2018.osaka.wordcamp.org/) held in Osaka on June 2nd, 2018, three researchers: Tomohiro OYAMADA, Yoko FUTAGAMI, and Taiki MISHIMA gave a joint presentation titled “Make a cultural property information database using WordPress” so as to report on how to customize and operate using WordPress for the cultural property database. After the presentation, active information exchange was carried out based on lots of questions asked by people engaged in system operation at local governments and research institutions.
Each of the operations required for TNRICP is unique. The information system which accumulates and transmits its achievements also requires uniqueness. We shall willingly release findings accumulated through the development and operation of the information system, in addition to our research outcomes. The page of “Seiki KURODA” from the “Name Database for Calligraphers and Painters.” Related picture images are displayed on the lower part of the screen.

Tokyo National Research Institute for Cultural Properties (TNRICP) has published a database for 61 lists of calligraphers and painters issued in the Meiji and Taisho periods (http://www.tobunken.go.jp/materials/
banduke
). This database has been reconstructed from the original one accessible exclusively with a dedicated application, which was created based on the collection of Mr. Shigeru AOKI, an art historian, as an outcome of Scientific Research on Priority Areas: Inventions in the Edo Period (Planned Research A03 “Research on the establishment of categorizations of objects and techniques in Japanese modern art”) in 2004.
For reconstruction, the database became accessible through different types of equipment with universal technologies, without depending on specific applications. To enhance the legibility of the details, the lists were photographed again at a high resolution.
Using the original name and classification data, a new database, focusing on the names, was created (http://www.tobunken.go.jp/materials/
banduke_name) and linked with the photographic images owned by TNRICP. These lists alone are just arrays of names, but they will surely allow you to explore new possibilities from the database as a platform. We would be glad if you could experience the great potential of the database with the linked images.
Finally, we express our sincere gratitude to Mr. Aoki and those who were involved in creation of the original database, as well as the Museum of Modern Art, Kamakura & Hayama, which now possesses these lists, and Ms. Saki NAGATO, its curator.