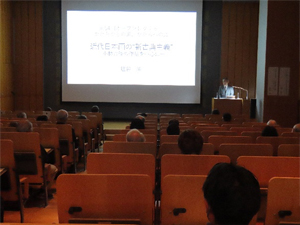 A scene from the open lecture

Every autumn, the Department of Art Research, Archives and Information Systems invites a wide range of audiences to the “Open Lecture” where researchers give lectures on the results of their research. A lecture titled “Road from Shape, Way to Shape” was held on October 30th, 2020. It is the fifth year for us to hold the lecture under the title. In previous years, lectures were held over two days with outside lecturers. However, in this year, we shortened the period to one day and reduced lecturers to two, selected from our institute, as prevention measures against COVID-19. The number of audience was also limited to 30, chosen by raffle. In the venue, temperature check was conducted and the speakers and audiences were asked to wear a mask and sanitize the hands.
In the first session, Mr. SHIOYA Jun, Director of the Department of Art Research, Archives and Information Systems and Head of the Modern/Contemporary Art Section delivered a lecture, titled “Neoclassicism in Modern Japanese Painting: Focusing on the Works of KOBAYASHI Kokei.” Mr. SHIOYA introduced the emergence of sophisticated and quiet styles in Japanese paintings represented by KOBAYASHI Kokei in the pre-war period of the Showa era. He also showed many slides and materials, explaining that those styles were influenced by older paintings from either Japan or China.
In the second session, Ms. FUTAGAMI Yoko, Head of the Cultural Properties Information Section made a presentation titled “Japanese Lacquer Products Exported to Thailand: Focusing on the Lacquer Doors of Wat Rajpradit, a first-grade royal Buddhist temple”. Wat Rajpradit was built in Bangkok in 1864 by order of King Rama IV. Ms. FUTAGAMI reported that Japan-made door panels decorated with lacquer paintings are used in the temple. She also explained the findings of the optical survey conducted on the doors and other lacquer products imported from Japan.
The results of the questionnaire survey of the audience shows that more than 90% of the participants of the lecture were “satisfied” or “generally satisfied” with the lecture.

Dissemination and Utilization of Knowledge of Art Magazine, “Mizue”: The 4th Seminar held by the Department of Art Research, Archives and Information Systems 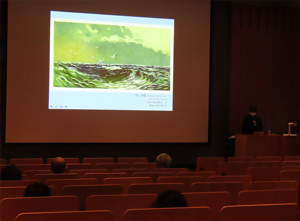 The Department of Art Research, Archives and Information Systems is now actively moving forward with digitalization and open access of the archives.
https://www.tobunken.go.jp/materials/katudo/822941.html>https://www.tobunken.go.jp/materials/katudo/822941.html
The art magazine, “Mizue,” which was first published in 1905, became available on the web in 2012 ahead of any other archived materials. The digital archive was developed jointly by Tokyo National Research Institute for Cultural Properties (TNRICP) and the National Institute of Informatics. Pages from the first issue published in the Meiji era to the 90th issue are now available on the web at http://mizue.bookarchive.jp/
At the seminar held on October 8th, 2020, Dr. MARUKAWA Yuzo (an Associate Professor at the National Museum of Ethnology and a visiting researcher in the Department of Art Research, Archives and Information Systems at TNRICP), one of the development members, lectured on the topic of “Dissemination and Utilization of Related Materials in the Study of Modern Art.” Although the site already has an index of articles by the author, Dr. MARUKAWA is continuously enhancing the index by further expanding the search function. He pointed out that an enhanced index would allow for both specialization and universalization as well as the sharing of information across professional boundaries. Using the paintings and writings in “Mizue” as examples that provide information on various regions in Japan and abroad, he presented its value and attractiveness as a collection of fieldnotes that have been unrecognized by art history specialists. He also made an impressive comment that dissemination and utilization of such knowledge with infinite potential has something timeless as well as in common with the “Technology of Intellectual Production” advocated by the ethnologist, UMESAO Tadao. The Thematic Exhibition UMESAO Tadao’s 100th Anniversary: The Front-runner of Intellectual Production, of which Dr. MARUKAWA was in charge, was held (September 3rd–December 1st, 2020) at the National Museum of Ethnology, which coincided with the seminar. 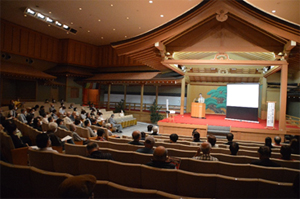 Bungo Province (the south-central region of Oita Prefecture) was ruled by OTOMO Sorin, a famous Christian feudal lord during the Azuchi-Momoyama period. It is a land with a history of missionary work by Francis Xavier and many other European missionaries. An exhibition, “BVNGO NAMBAN: Namban Culture Lord Ōtomo Sōrin Cherished,” was held at the Oita Prefectural Center for Archaeological Research from October 10th to December 13th, 2020. It introduced the relationship between the province and Namban culture and/or Christianity, as well as the results of scientific analysis of Namban cultural artifacts, which has been making great progress in recent years.
The exhibition consisted mainly of the artifacts of the Namban culture, including ceramics excavated from the Bungo-Funai archaeological site, a stronghold ruin of the OTOMO clan, as well as related works preserved in different areas in Japan, including the Namban lacquer and paintings that Tsukumi City has collected over the years. Mr. KOBAYASHI Koji, Head of the Trans-Disciplinary Research Section, Department of Art Research, Archives and Information Systems, spoke at the opening commemorative lecture held on the first day of the exhibition at the request of the organizer. His lecture, titled “Catholic Missionary Activity and Namban Lacquer -Consideration by Scientific Analysis, Comparison with Medal Research- ,” focused on the latest research findings on Christian artifacts and the Namban lacquer, which correlated with the exhibition.
Although the venue was set up with a large seating space in order to reduce the risk of COVID-19 infection, about 200 people attended the lecture, showing the deep interest of the local residents in Namban culture and the history of Christian missionary work.

2020 Training for Museum Curators in Charge of Conservation Lecture on measures against biodeterioration The abovementioned training was held from October 5th to October 15th, 2020. Although we have received many applications, the training was provided to 17 curators and others (or half the usual number) as a measure against the spread of COVID-19. Starting from last year, the training is implemented jointly with the National Center for the Promotion of Cultural Properties (CPCP). The CPCP took charge of the training sessions in the first week and Tokyo National Research Institute for Cultural Properties (TNRICP) in the second week. During the training, various control measures were thoroughly implemented to prevent the spread of infection: body temperature checking, sanitizing, and avoidance of the “3C’s.” Moreover, the participants wore gloves during hands-on training sessions. Furthermore, training materials were distributed to each trainee.
During the first week when the CPCP was in charge, participants learned the basics of the conservation environment through classroom lectures. In addition, reports were made on the instruction and advice regarding the “Virus Removal and Disinfection Work at Museums, etc.” addressed jointly by three organizations, namely the Agency for Cultural Affairs, CPCP, and TNRICP. During the second week, certain sections at the Center for Conservation Science provided separate half-day sessions and provided classroom lectures and practical workshops with a variety of topics such as the concept of conservation and restoration of cultural properties, the method of addressing on-site issues with the application of basic natural science knowledge, and other topics. Participants appreciated these sessions, commenting that they were informative and useful. On the last day of the training, Dr. KOUZUMA, Director of the Cultural Heritage Disaster Risk Management Center established in October 2020, was invited to give a lecture on the “Disaster Risk Management of Museums,” which turned out to be a valuable occasion to think about the role played by museums in protecting cultural properties from disasters.
We will keep working to provide better trainings to suit the needs of the time in 2021.