Presentation of Research into Materials of Ichimatsu Tanaka and Tsugiyoshi Doi -Seminar Held by the Department of Art Research, Archives and Information Systems The workshop is in session.

The Department of Art Research, Archives and Information Systems held their 8th workshop on January 29th, 2019, and gave presentations on the following two subjects.
– Tomoko EMURA: “The Eyes and Hands of Ichimatsu Tanaka—Materials of Ichimatsu Tanaka; centered on survey on paintings recorded by Ichimatsu Tanaka while he was residing in Tsuruoka”
– Ms. Takiko TATARA (part-time instructor, Kyoto University of Art and Design): “Signs of Changeover of Generations in the Modern Kyoto Art World—Point on materials formerly owned by Tsuyoshi Doi”
This seminar was related to Exhibition “Making notes of Japanese Art History―The research notes of Aimi Kōu, Tanaka Ichimatsu, and Doi Tsugiyoshi,” which was held at Jissen Women’s University’s Kosetsu Memorial Museum and Kyoto Institute of Technology’s Museum and Archives from May through August 2018 (cf. our May 2018 monthly report), and we also unveiled additional materials that were discovered after the exhibition. This seminar attracted many researchers from inside and outside Tokyo National Research Institute for Cultural Properties and lively discussions were held from a variety of angles. Both Ichimatsu Tanaka and Tsugiyoshi Doi were researchers who built the foundation for research into Japanese art history, authored a large number of books and chalked up a substantial track record, and their records, which underpinned their research, and the materials they collected must be better assembled in the form of an archive. We will organize the staggering amount and variety of analogue materials by leveraging digital features in a bid to create an archive of cultural properties that will contribute to a wider range of research down the road.

A Guide to Appreciating “KURODA SEIKI: A Selection from the Kuroda Memorial Hall Collection” Published Cover of “KURODA SEIKI: A Selection from the Kuroda Memorial Hall Collection”

The Kuroda Memorial Hall, one of the exhibition facilities of the Tokyo National Museum (TNM), was originally built as the Institute of Art Research, the predecessor of Tokyo National Research Institute for Cultural Properties (TNRICP). The memorial hall for works of Seiki Kuroda (1866-1924), a Western-style painter who was active from the late 1800s to early 1900s, was built in 1930, with his works being donated by members of his family. Against this background, even after ownership of the memorial hall was transferred to the TNM, TNRICP continued its research into the artist.
Now, TNM and TNRICP have edited and produced a guide entitled “KURODA SEIKI: A Selection from the Kuroda Memorial Hall Collection,” to help visitors to the memorial hall appreciate his works. This 40-page guide describes his 46 main works, such as Lakeside and Wisdom, Impression, Sentiment, with color illustrations and easy to understand explanations of the masterpieces and paintings by the artist, known in Japan as “the father of modern Japanese western-style painting”. (Price: \700 including tax; for inquiries, contact Insho-sha, Sho Bldg. 7th floor, 3-14-5 Nihonbashi, Chuo-ku, Tokyo 103-0027; Tel.: 03-6225-2277). We would be pleased if this guide can help you to appreciate his works when you visit the memorial hall. 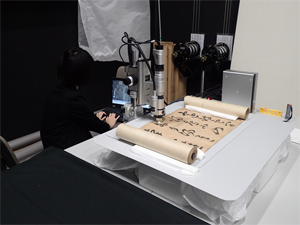 Fibers used in cultural properties come from a variety of sources including hemp, ramie, kudzu, and bashō (Japanese banana). As discussed in the May 2017 monthly report (Takuyo YASUNAGA, “Historical Position of ‘Hakubai-zu byobu’ by Goshun－A workshop is organized by the Department of Art Research, Archives and Information Systems”), we have learned in the more recent years that in addition to silk and paper, fiber is also used as the support medium in paintings. There are no well-defined, established methods of identification, however, in part due to the difficulty of discerning the characteristics of individual fibers once in textile state. Tokyo National Research Institute for Cultural Properties (TNRICP) is working to find a solution to these and other problems, in a cooperative research effort into fiber identification among the Department of Art Research, Archives and Information Systems; Center for Conservation Science; and Department of Intangible Cultural Heritage.
As a part of this research, the three-dimensional forms of fibers in a calligraphy work and a dyed article made of bashō-fu (textile woven from banana plant fiber) were examined using a digital microscope at the Okinawa Prefectural Museum from January 22nd to 23rd, 2019.
Bashō-fu is textile developed in Okinawa and Amami Islands and has been designated an important intangible cultural property, with Ms. Toshiko TAIRA recognized as an individual practitioner and Kijōka Bashō-fu Preservation Society recognized as a heritage protection organization. Of the work examined this time, the calligraphy work is known to have been created in a particular year and the dyed article is an item whose wearer can be guessed at. The examination showed that despite being all works thought to be made of bashō-fu, the look and the feel of the textiles varied due to differences in yarn density and yarn processing method.
While it is difficult to judge whether the differences are rooted in regional variation within Okinawa and Amami Islands or due to differences in use, we were able to conclude that many kinds of bashō-fu were created through different processes.
Accurate identification of fibers goes to the most basic data on a particular work, and is a key element in considering the circumstances of production. It is also a pressing issue in the organization of basic data for use in the present repair or the passing on to future generations of intangible cultural heritage.
We hope to continue furthering the research into identification of fibers through field investigations into techniques in conjunction with examination of exhibits at museums and art museums.