Dismantlement of the base platform. 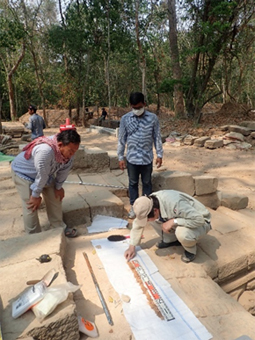 Tokyo National Research Institute for Cultural Properties (TNRICP) has been providing technical support to the Authority for the Protection and Management of Angkor and the Region of Siem Reap (APSARA) for the conservation and sustainable development of Ta Nei Temple in Angkor, Cambodia. As a part of this project, TNRICP dispatched a total of four members, including an outside expert, to Cambodia between February 26 and March 18, 2020 for 3D documentation of the base structure and an investigation of the foundation’s strength of the East Gate under restoration.
Directed by Associate Professor Dr. OISHI Takeshi, from the Institute of Industrial Science, the University of Tokyo, a 3D laser scanning survey was conducted between February 27 and 28, 2020 to accurately record the state of the base platform including that in the excavation pits at the external corners of it, which were revealed after the superstructure was dismantled. After that, it was originally planned to conduct a flat-plate loading test and uniaxial compression test of the laterite substrate material. However, because of the spread of COVID-19, the experts in charge were unable to join the mission and only a simple dynamic cone penetration test (DCPT) was performed at the site, which was also conducted in December 2019.
DCPT was conducted at 11 points to check the bearing capacity of the soil infill inside the platform and the foundation layer at the outer edge of the platform. The outcomes of the test indicated that test points below the wall structure have generally larger values than that of the central area (under the pavement). Although the factors such as the difference in the climatic conditions at the time the tests were performed (wet and dry season) might affect the test results, the long-term structural weight causing the rammed earth beneath the walls to get compacted could have caused this distinction. It could be interpreted as the soil infill inside the platform has developed a certain degree of strength enough to support the upper weight of the structure at present. In addition to DCPT, a core sampling was also conducted with a hand auger to check the cross-sectional structure, including the lowest layer of the foundation.
Further, indoor material tests were performed by Professor Dr. KUWANO Reiko and Assistant Professor Dr. OTSUBO Masahide, from the Institute of Industrial Science, the University of Tokyo. Three kinds of specimens (original laterite stone, new laterite stone used for replacing deteriorated parts, and lime mortar used for the level adjustment) were tested in the laboratory through uniaxial compression test, etc. The test results indicated that there was no significant difference in the strength of the old and new laterite materials.
The recent global pandemic has also affected our international cooperation project severely due to the difficulty of reaching to the site yet still the request of completion of the project as scheduled. However, we are trying to adapt to this situation by trying to find a way to communicate remotely with the counterparts through effective utilization of online meeting tools and the digital data of the structure that we have created thus far.