Digital Content Creation and Release of “Saichufu” by ITO Jakuchu 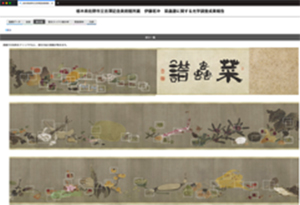 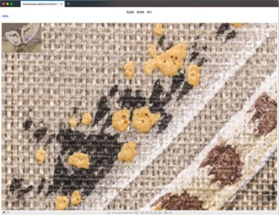 The Department of Art Research, Archives and Information Systems creates digital content involving investigative research on artworks pursued by Tokyo National Research Institute for Cultural Properties and displays the content in the Library. The digital content of “Saichufu (Compendium of Vegetables and Insects)” (important cultural property) by ITO Jakuchu in the collection of the Yoshizawa Memorial Museum of Art, Sano (https://www.city.sano.lg.jp/museum/) has now been completed. A dedicated terminal can be used to view the results of color material studies through high-definition color images, near-infrared images, and fluorescent X-ray analysis. While they can only be viewed for academic and research purposes and copies cannot be made, an abundant amount of information on artworks can be freely referenced by applying digital image characteristics. “Saichufu” is the only silk scroll color painting by ITO Jakuchu in existence. The painting depicts approximately 100 species of vegetables and fruits and over 50 species of insects and amphibians, and is known for its delicate and quaint expressiveness. The image viewing terminal can be used during the hours when the Library is operational. Please refer to the following link if you would like to use it:
http://www.tobunken.go.jp/~joho/japanese/library/library.html 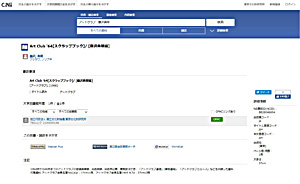 Bibliographic data on book in the Institute collection appearing on CiNii Books.

Tokyo National Research Institute for Cultural Properties has become a member of the NACSIS-CAT/ILL Catalog Information Service. It has prepared a system for uploading the bibliographic data on book stored at each of its research departments (Department of Art Research, Archives and Information Systems, Department of Intangible Cultural Heritage, Center for Conservation Science, and the Japan Center for International Cooperation in Conservation) to CiNii Books (https://ci.nii.ac.jp/books/).
The purpose of joining NACSIS-CAT is twofold: (1) the widespread visualization of collected book information; and (2) the improvement of our bibliographic data (standardization). With respect to (1), we will further promote the use of our collected book information released at TOBUNKEN Research Collections (http://www.tobunken.go.jp/archives/) on the Institute’s official site by releasing it to many more researchers and students via upload to CiNii Books. With respect to (2), we have been requested to create a highly effective system by standardizing bibliographic data provided by us through data tie-ups with outside agencies (The Getty Research Institute and OCLC. etc.). As NACSIS-CAT allows users to reference and utilize various domestic and overseas library catalog data, it is an infrastructure system suitable for the Institute to efficiently engage in standardization work.
The task of uploading 300,000 books from our library to CiNii Books and standardizing bibliographic data is currently underway. While this will take some time until completion, we will prepare a system of providing our collected books and information that we have collected over many years to contribute to the research activities of many more people.

The Art of Sakhalin and the Kuril Islands: Seminar Held by the Department of Art Research, Archives and Information Systems 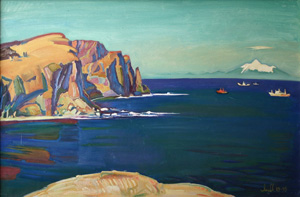 In recent years, neighboring countries such as China, South Korea, and Taiwan have made progress in researching modern and contemporary art, and opportunities to view this progress, such as at exhibitions, have increased in Japan. However, brisk artistic activities have largely been unheard of in the North of Japan, even in regions such as Sakhalin which is presently Russian territory. Mr. Hisashi YAKOU’s (Hokkaido University) presentation at a seminar held by the Department of Art Research, Archives and Information Systems on March 26th entitled, “The Art of Sakhalin and the Kuril Islands” was very fascinating as he described artistic trends in this region based on field work after the Second World War.
As Sakhalin was a Japanese territory prior to the Second World War, the landscape was depicted by Japanese painters such as Shoji KIMURA (1905–91) and Kojiro FUNAZAKI (1900–87). It became a territory of the Soviet Union after the war, and Russian painters created motifs based on this region. The painter Givi Mantkava (1930–2003) who moved there from Georgia depicted the landscape of the Far East, applying a modernistic technique and laid the foundation of Sakhalin art. Numerous artists from Moscow and Vladivostok visited Kunashir (Kunashiri) Island and Shikotan Island. Among them, the activities of the Shikotan Group attracted particular attention as they spent several months of almost every summer in Shikotan Island from 1966 to 1991. Of their works, landscape paintings of Mt. Chachadake on Kunashir Island and the bay area in particular are suggestive of traditional western paintings themes, for example, on a view of Naples. Mr. YAKOU made the intriguing point that there may exist a political intent in terms of the Europeanization of the border area. 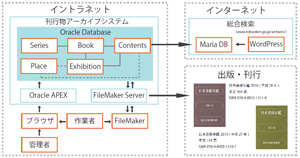 The 3rd Research Conference of the Japan Society for Digital Archive was held from March 15th to 16th, 2019 at the Yoshida Campus in Kyoto University. Three employees from Tokyo National Research Institute for Cultural Properties attended the conference to make a poster presentation concerning the cultural property information database and gather information on recent trends in digital archives.
The poster presentation showed the publications archive, which is a database primarily for the collected materials and publications of the Institute. The “Yearbook of Japanese Art” and “TOBUNKEN Research Collections” (www.tobunken.go.jp/archives/) which are published and released using the archive system were also described, focusing on the archive’s construction and management. We exchanged opinions with parties concerned with digital archives, and the presentation was a precious opportunity to understand the kind of cultural property information database that is demanded of us. We reacknowledged how we provide basic information that contributes to cultural property research.
By participating in the research presentation, we gathered wide-ranging information was collected on digital archives in general, not just cultural properties. We gained knowledge of technical issues and system issues related to digital archives, as well as local research and utilization of digital archives by the community. In recent years, there has been a trend toward digital archive collaboration. This conference became a good opportunity for us to consider external provisioning and tie-ups with outside information sources and not simply transmit information on cultural property.
The program for the 3rd Research Conference of the Japan Society for Digital Archive can be found at the following website.
http://digitalarchivejapan.org/kenkyutaikai/3rd/3rd_program 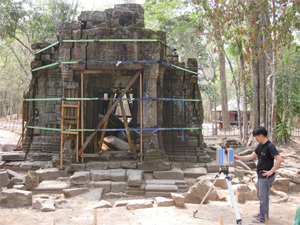 Survey of the east gate using a laser scanner 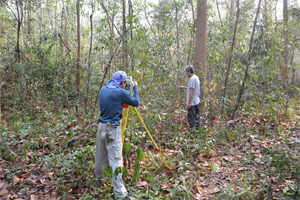 Tokyo National Research Institute for Cultural Properties provides technical support to the Authority for the Protection and Management of Angkor and the Region of Siem Reap (APSARA) to conserve and manage the ruins of the Ta Nei Temple in Angkor, Cambodia. The fifth field study was conducted at this site from March 8th to 17th, 2019.
Three-dimensional (3D) measurements of the east gate were recorded and a topographical survey around the site was conducted with the assistance of Associate Professor Takeshi OISHI’s laboratory in the Institute of Industrial Science, the University of Tokyo, and survey expert Mr. Kenji UCHIDA, in association with the APSARA staff.
Although the east gate is the original main gate of this temple, it is away from the current traffic line for tourists. As many of the constituent building materials are unstable, appropriate repairs must be made from the perspective of the exhibition. The measurements were performed using a laser scanner and a drone equipped with a camera to capture detailed 3D recordings of the gate as well as the position and shape of stones scattered in the vicinity. Based on the information obtained, the state of deformation and damage will be comprehensively grasped and applied to consider specific repair plans.
A topographical survey was conducted using a total station mainly on the southeastern area of the site, which had not been surveyed thus far. Using the collected data, a detailed topographical map of the overall site can be created, which will contribute to maintaining the temple area and can be applied to the surrounding temples over a wide range. 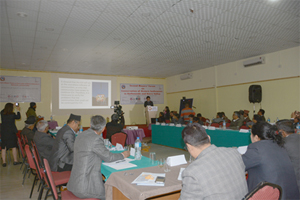 As part of the above-mentioned project commissioned by the Agency for Cultural Affairs, Tokyo National Research Institute for Cultural Properties (TNRICP) continues to support the building of an administrative network to preserve historic settlements in Nepal. The “2nd Mayors’ Forum on Conservation of Historic Settlements in Kathmandu and Kavre Valley” was held in Lalitpur Metropolitan City on March 12th, 2019, under the joint auspices of Lalitpur municipality and TNRICP, which dispatched eight researchers.
At the 1st Mayors’ Forum held in Panauti in 2017, the state of preserving historic settlements and related issues were shared and discussed. The theme of the second forum was “conservation of tangible and intangible cultural heritage in historic settlements.” Presentations were given by experts from Nepal and Japan and a discussion was held with the attendees. On the day in question, around 80 people, including 11 mayors, 8 deputy mayors, and several government-affiliated engineers, participated from 14municipalities.
From the Nepal side, presentations were given on festivals and intangible cultural heritage such as festivals and craftworks in four municipalities and initiatives to pass them on to future generations as well as historic settlement surveys and conservation initiatives after the 2015 Gorkha Earthquake. From the Japan side, Tomoko MORI, Associate Professor at Sapporo City University, presented the survey results from Khokana village, while Hiromichi KUBOTA, Head of the Intangible Folk Cultural Properties Section of TNRICP, presented the survey results of intangible cultural heritage in Khokana and the state of conserving intangible cultural heritage in Japan.
Both countries have common issues in conserving local cultural heritage, such as lack of personnel and funding. In Nepal, as changes in traditional local communities accelerate, a sustainable framework for conserving cultural heritage in local communities and appropriate support from the local government under the leadership of mayors are essential.
We will continue to provide technical assistance while sharing information and deepening dialogue between the two countries.