Regarding the Notes by Researcher Takurei HIRAKO: Seminar Held by the Department of Art Research, Archives and Information Systems 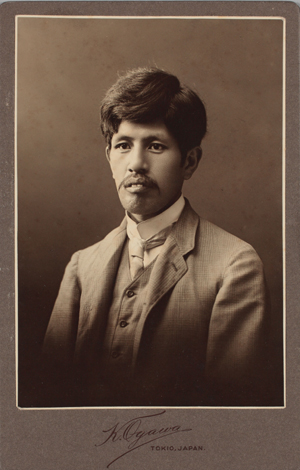 Portrait of Takurei HIRAKO (taken in 1908) 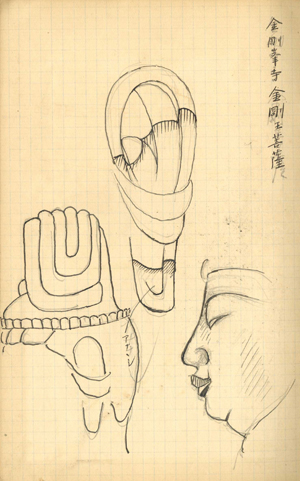 From the notes of Takurei HIRAKO, a sketch of Kongo-o-bosatsu (Vajrarāja) at Kongobuji Temple on Mt. Koya which burned down in 1926. Takurei often drew sketches of the ears of Buddhist statues.

Takurei HIRANO (1877–1911) is a Buddhist art researcher who was active between the 1890s and the 1900s. He began working for the Tokyo Imperial Museum (present day Tokyo National Museum) from 1903 and was active in the front lines of research at that time, such as through his involvement in the issue of rebuilding Horyuji Temple. He died young at the age of 35 in 1911.
In 2014, Tokyo National Research Institute for Cultural Properties received some materials in the possession of Takurei’s sculptor friend Taketaro SHINKAI (1868–1927) which included Takurei’s research notes. At the seminar which was held by the Department of Art Research, Archives and Information Systems on May 31st, 2019, Dr. Tetsuei TSUDA (Aoyama Gakuin University) gave a presention on these research notes from the perspective of Buddhist art history titled, “Introduction to Research Materials: The Notes of Takurei HIRAKO Housed at Tokyo National Research Institute for Cultural Properties.”
These notes include numerous sketches of Buddhist statues and paintings that Takuei drew at various temples in the Kansai area. Among them are detailed drawings of Buddhist statues that have now been lost and are a valuable resource for today’s researchers. In a notebook bound in Japanese style titled Kogeishiso can be found the inscription on a Buddhist statue thought to have been recorded by Takurei during its disassembly and repair. This is an example of rare information that cannot be discovered without performing similar repairs on Buddhist statues.
After Dr. TSUDA’s presentation, Dr. Shuji TANAKA (Oita University) a specialist on modern sculpture described the relationship between Taketaro SHINKAI and Takurei, and Ms. Junko ONISHI (Tokyo University of the Arts) who is knowledgeable about the modern history of Buddhist art research described the network of researchers surrounding Takurei at the time, and information was shared. Dr. Yuzo MARUKAWA (National Museum of Ethnology) a specialist on informatics also participated in a discussion on how this material should be released and applied. 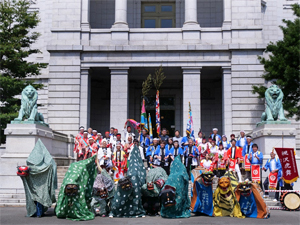 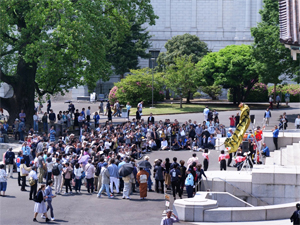 The “Tokyo Shishimai Collection 2020” event was held on May 11th and 12th (Saturday and Sunday), 2019, in the Front Garden of the Tokyo National Museum. This event was planned by the Department of Intangible Cultural Heritage and was held as part of Japan Cultural Expo, an arts and culture festival that will coincide with the 2020 Tokyo Olympics and Paralympics. It was co-sponsored by Tokyo National Research Institute for Cultural Properties, the Tokyo National Museum, and the Japan Arts Council, in cooperation with tateito-yokoito llc., Culture Vision Japan Foundation Inc., and DO CREATION CO., LTD. The purpose of this event was to showcase lion dances from all over Japan as folk art which prominently expresses Japan Cultural Expo’s theme of “the Japanese and Nature”, and to transmit this to the world by performing the lion dances in Tokyo.
Lion dance performances, particularly from the three prefectures stricken by the Great East Japan Earthquake, were involved in this 2020 pre-event. During the two days, three lion dances were performed by three prefectures: Iwate Prefecture performed Rikuzentakata City’s “Tsukizawa Toramai (Tiger Dance)” (Tsukizawa Arts Preservation Society); Miyagi Prefecture performed Onagawa Town’s “Shishifuri (Lion Dance)” (Takenoura Lion Dance Preservation Society/Washinokami Kumano Shrine Lion Dance General Meeting), and Fukushima Prefecture performed Shinchi Town’s “Fukuda Juuni Kagura (Twelve Kinds of Sacred Music and Dancing Performed at Shrines)” (Fukuda Twelve Kinds of Sacred Music and Dancing Preservation Society). According to a count by the Tokyo National Museum, 2215 people attended the six shows during the two-day event.
In addition to watching the performances, many spectators participated in a hands-on learning experience by having the opportunity to actually touch the lion masks and musical instruments that ordinarily cannot be seen up close, and hearing explanations about the lion dances. Foreign language pamphlets were provided and bilingual staff was prepared so that visitors from various countries could enjoy the shows.
On a similar note, a Lion Dance Forum is planned for September of this year. In addition to holding lion dance performances in Tokyo, information about lion dance festivals and events held in various regions of Japan will be released to give many more people the opportunity to visit the regions where lion dance festivals are performed. In order to preserve intangible cultural heritage, this kind of information transmission and networking is crucial. 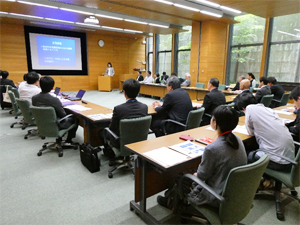 The 2nd workshop for specialists on the new insecticidal treatment for historical wooden buildings, known as “humidity-controlled warm-air treatment,” was held on May 9th, 2019.
Pest-borne damage to historical wooden buildings risks not only the loss of important wooden materials but also building safety, as the wooden materials can become hollow, thus weakening the strength of the lumber construction material and the building itself. In response to severe pest-borne damage, the Rinno-Ji Temple at Nikko has undergone closure and repair. Fumigation with sulfuryl fluoride gas, which is known to have almost no effect on cultural properties, was performed to eradicate all noxious pests in the building. However, there are huge health and safety risks associated with the use of mass fumigation with poisonous chemical substances, and such treatment can also dissuade neighboring institutions from opening to the public.
To address this issue, humidity-controlled warm-air treatment was developed as a new insecticidal treatment. This method eliminates pests by increasing the temperature to 60 degrees Celsius while regulating the humidity without altering the water content of the wood, thus minimizing any damage to the wooden content. Two successful domestic cases have been reported with no significant damage found in buildings containing Urushi (Japanese lacquer) decorations. Subsequent examination of these cases indicates that the technology used in this new treatment is nearly ideal. Nevertheless, concerns have been raised regarding the number of technicians required and the cost involved, which must be addressed before formally establishing humidity-controlled warm-air treatment as a valid insecticidal treatment. Also, since this a newly developed treatment, its long-term performance is difficult to evaluate; there may be as yet unknown effects inherent in the use of this treatment.
Several issues must be resolved before humidity-controlled warm-air treatment can be considered to be an established insecticidal treatment method. We look forward to working over the long-term in cooperation with related organizations.

Exchange of Opinions at the Tirana University and Inspection of Wall Paintings Located at the Historic Center of Berat, Albania 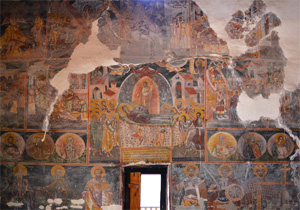 The wall paintings in the Church of St. Mary Blaherna 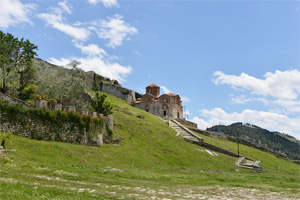 The Church inside Berat Castle

From May 19th to 23rd, 2019, members of the Japan Center for International Cooperation in Conservation visited the Tirana University and the Historic Center of Berat, Albania. The aim was to build an international networks with specialists in the field of cultural heritage conservation / restoration and gather international information.
At the Tirana University, Professor Edlira Çaushi spoke about the current state of system for educating students in the field of cultural heritage conservation. In the Historic Center of Berat, we visited Berat Castle and inspected the techniques and the state of conservation of wall paintings in churches built between the 13th and 16th centuries. We were extremely impressed with the quality of the wall paintings, which were painted in the post-Byzantine style, developed after the end of the Byzantine Empire with the fall of Constantinople (present day Istanbul) in 1453. Although it was clear that past restorations had taken place, the wall paintings have been inappropriately maintained thereafter and have again incurred major damage. Professor Edlira Çaushi discussed how one of the major problems in today’s Albania was the weak initiatives taken in relation to the maintenance of cultural heritage.
Currently, the maintenance protocols undertaken on cultural heritage in various regions of Albania has come under scrutiny. Hereafter, the Japan Center for International Cooperation in Conservation will continue to gather information and exchange opinions with international specialists to consider how Japan may offer assistance to resolve this problem.