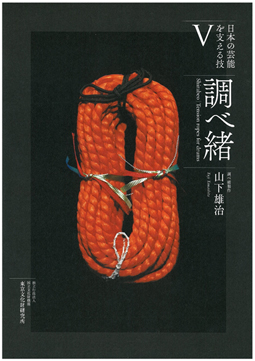 The fifth brochure of the series addressing “Techniques Supporting Traditional Performing Arts” has been published. This brochure focuses on Mr. YAMASHITA Yuji, manufacturer of “shirabeo” (also called “shirabe”). Shirabeo is a special hemp rope used to tie the front and back leather of small hand drums, large hand drums, and drums used for noh and kabuki plays and in festivals held all over Japan. Mr. Yamashita has been working on the production of shirabeo, nurturing the younger generations, and disseminating production techniques as the fourth head of a long-established store called Yamashita Keishudo (Kyoto), which has been dealing in shirabeo for generations. The brochure mentions a part of the secret technique involved in producing shirabeo as “firmly yet softly twist the rope.” The survey on Mr. Yamashita’s technique in producing shirabeo was conducted prior to the publication of the brochure. The outline of the survey is available in the “Investigation Report on Techniques for Preserving Cultural Properties with Focus on Musical Instruments 2” (MAEHARA Megumi & HASHIMOTO Kaoru, “Research and Reports on Intangible Cultural Heritage” 13, Tokyo National Research Institute for Cultural Properties, 2018). Please refer to the report along with the brochure. (Access here to download the report: https://www.tobunken.go.jp/ich/maehara-hashimoto-2)
The series of brochures is available to those who require it for any non-commercial purpose. It will be delivered by Yu-Pack parcel post for COD. (Please note that the brochure may be out of stock.)
If you require any of the brochures, please send us details of 1. Your name, 2. Postal code & address, 3. Phone number, 4. The brochure you need (I-V) and the number of copies, by e-mail to mukei@tobunken.go.jp (Department of Intangible Cultural Heritage).

We will continue to publish brochures focusing on techniques to produce/repair musical instruments as skills to conserve cultural properties.

Second Recording of the Live Performance of “Miyazono-bushi” 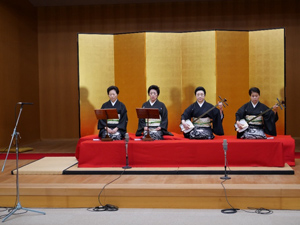 On July 31st, 2019, the Department of Intangible Cultural Heritage recorded a live performance of Miyazono-bushi (second recording of a live performance) at the Performing Arts Studio of Tokyo National Research Institute for Cultural Properties.
Miyazono-bushi is an important intangible cultural property of Japan which was founded in the first half of the 18th century by Miyakoji Sonohachi in Kyoto. After seeing a revival during the mid- 18th century in Edo, it has become what it is today. Miyazono-bushi can be characterized by its distinctive vocal part called joruri (dramatic narrative chanted to a shamisen accompaniment) that is sang in a solemn and silky voice, accompanied by the soft and thick sounds of a chuzao shamisen (middle-neck sized three-stringed Japanese banjo). With training and experience, subtle expressions are produced through their harmonization. Traditional songs include classical dramatic piece in ten acts as well as modern songs, with the content of these songs being almost entirely about elopements for double suicides.
This time, two pieces were recorded: a classical piece, the “Michiyuki Natane no Midarezaki – Yamazaki” (blooming of rapeseed flowers during an elopement – Yamazaki) and a modern piece, the “Uta no Nakayama” (small path near Seikanji Temple). Both pieces were performed by Miyazono Senroku (lead singer; an individual certified as a Holder of Important Intangible Cultural Property or what is called living national treasure), Miyazono Senyoshie (supporting singer), Miyazono Senkazuya (lead shamisen player), and Miyazono Senkoju (supporting shamisen player).
The Department of Intangible Cultural Heritage will continue to record live performances of Miyazono-bushi classics, as well as new pieces that get few occasions to be performed live. 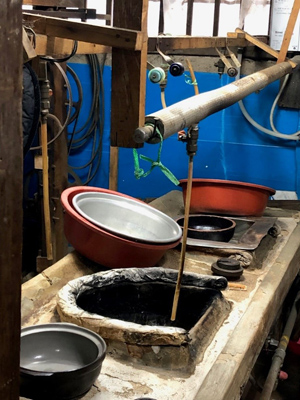 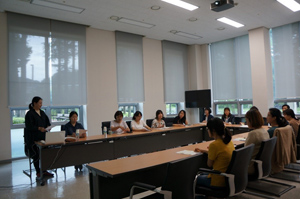 The Department of Intangible Cultural Heritage, Tokyo National Research Institute for Cultural Properties has been engaged in research exchange with the National Intangible Heritage Center in the Republic of Korea since 2008. This exchange involves conducting overseas research while staying at the other party’s institution for a certain period of time and holding joint symposiums. Megumi Maehara, Head of the Intangible Cultural Properties Section of the Department sojourned in South Korea from July 1st–19th, 2019 to pursue overseas research.
Considering current conditions in Japan where cultural heritage application is anticipated, the purpose of this overseas research was to derive hints at preserving and transmitting cultural heritage preservation techniques used in musical instrument manufacturing and repair, in addition to cultural heritage utilization. During her stay, Ms. Maehara visited musical instrument manufacturers, musical instrument materials manufacturers and those associated with the education on, and preservation and succession of, traditional performance art (music), and also research organizations. The aim of her visit was to investigate South Korean traditional musical instrument manufacturing and repair techniques, the tools and raw materials used, the frameworks utilized to support these techniques, and the treatment of these techniques in the education about, and dissemination of, traditional music to the masses.
In South Korea, classical music and folk music are considered to be inseparable facets of “traditional Korean music (gugak).” Having knowledge and practical skill in these subjects are requirements for teachers who wish to be employed in music education because “traditional Korean music” is an indispensable qualification for music educators. This environment where one can naturally come in contact with traditional Korean music is starkly different from that in Japan. Nonetheless, there is still room to cultivate a general awareness of the techniques and raw materials supporting traditional performance art (music) in Japan and even in South Korea. Case studies and common issues discovered from this research exchange were compared to the current situation in Japan and the results were presented orally on July 18th at the National Intangible Heritage Center. Together with an investigative report in Japan, an overview of this investigation into musical instrument manufacturing and repair techniques will be published in the 14th volume of the “Research and Reports on Intangible Cultural Heritage” to be issued at the end of the fiscal year.
The Institute would like to extend its deepest gratitude to Kyeong-Hye, Kang of the National Intangible Heritage Center for supporting its research during this exchange, to interpreter Ji-Ye, Lee, and to everyone at the National Intangible Heritage Center. On August 3rd (Fri.), 2018, the 12th public lecture of the Department of Intangible Cultural Heritage, Tokyo National Research Institute for Cultural Properties and the 24th exhibition and demonstration seminar of Tokyo samisen and koto” were held jointly by Tokyo National Research Institute for Cultural Properties and Tokyo Japanese Musical Instruments Association (Tohokyo) under the theme of the “craftsmanship underlying the traditional sounds.”
In the morning, instrument makers (koto and samisen) from Tohokyo gave demonstration and explanation along with time for Q&A session and hands-on experience. Participants had a valuable opportunity to talk directly with makers and learn how to play the instruments. At the lunch time, a staff member who had been engaged in instrument manufacturing and inspection for repairs in the Department of Intangible Cultural Heritage gave a panel talk by introducing specific examples. At the public lecture in the afternoon, three lecturers raised the issues concerning the craftsmanship underlying Japanese traditional sounds and reported their activities from different positions. With a commentator joining in the seminar, all those issues and problems were organized, and opinions were exchanged on clues for solution. Lastly, young promising players closed the seminar with their nagauta (ballads sung to samisen accompaniment). The seminar participants shared the issues at various levels surrounding the traditional craftsmanship with producers, researchers, and players being linked together.
The seminar was attended by 148 participants from various communities, such as manufacturers of music instruments and their accessories, live performers from different genres, researchers, educators, and devotees of traditional performance arts. It was found that there is a great interest in the craftsmanship underlying traditional performance arts. A report will be published at the end of this year, and going forward, we will conduct multi-faceted research on this theme and continue with our studies benefitting the preservation and inheritance of craftsmanship, by utilizing the newly established network at this opportunity.

First Recording of the Live Performance of “Miyazono-bushi” On July 30th, 2018, the Department of Intangible Cultural Heritage recorded a live performance of Miyazono-bushi (for the first time) at the Performing Arts Studio of Tokyo National Research Institute for Cultural Properties. Miyazono-bushi is designated as a nationally important intangible cultural property.
The first MIYAKOJI Sonohachi created Miyazono-bushi in Kyoto in the early 18th century. It declined later in Kyoto, but was revived in Edo in the mid-18th century, and has been inherited until today. The musical features of Miyazono-bushi are its unique joruri (vocal part), which is heavy yet silky, and the sound of the chuzao (middle neck) shamisen (Japanese banjo), which is soft yet thick. The traditional tunes are divided into 10 classical ones and modern ones, whose themes are mostly elopements for double suicides.
This time, a classical tune, the “Scene of KOHARU Jihee Using Kotatsu (Japanese foot warmer)” (Kotatsu), and a modern tune, “Double Suicide in Minowa” were recorded. Both were performed by MIYAZONO Senroku (lead singer: an individual certified as a Holder of Important Intangible Cultural Property or what is called living national treasure), MIYAZONO Senyoshie (supporting singer), MIYAZONO Senkazuya (lead shamisen player), and MIYAZONO Senkoju (supporting shamisen player).
The Department of Intangible Cultural Heritage will continue to record the live performance of classical Miyazono-bushi tunes as well as its modern tunes, which are seldom played.

The First Recording of Heike Rehearsal (Prof. Haruko KOMODA, who served as our adviser, in the foreground) Heike (or Heike-biwa) is one of Japan’s traditional performing arts wherein the blind beggar priests (biwa hōshi) musically recite Heike Monogatari (the Tale of the Heike) while playing the biwa (lute) as an accompaniment. It flourished and reached its peak in the Muromachi period. However, Heike-biwa has gradually declined in popularity since then, and now there is only one person who has officially inherited this tradition. On January 15th, the Department of Intangible Cultural Heritage recorded Heike at the Performing Arts Studio of Tokyo National Research Institute for Cultural Properties, with the help of the Heike-gatari Research Society, a study and performance group founded in 2015 under the initiative of Prof. Haruko KOMODA of Musashino Academia Musicae to promote and pass down the techniques of Heike-gatari (recitation of the Tale of the Heike) to the next generation.
The Department recorded the following performances: the traditional piece, Koyo; the reconstructed piece, Kogo (from the sanjyu part to the beginning of the kudari part); the reconstructed piece, Atsumori (the kudoki part at the start); and the reconstructed piece, Gion Shoja. One of the most notable characteristics of the Heike-gatari Research Society is that the Society, which consists of emerging performers of the Jiuta and koto repertories, Mr. Yuji KIKUO, Mr. Naoichi TANAKA, and Mr. Shogo HIYOSHI, along with Prof. Haruko KOMODA, a leading authority in the study of Heike, has been reconstructing Heike based on objective evidence. The Department, together with the Society, will continue to archive the recordings of not only traditional pieces but also reconstructed pieces of Heike.