Barking of the Manchurian Elm and Japanese Lime 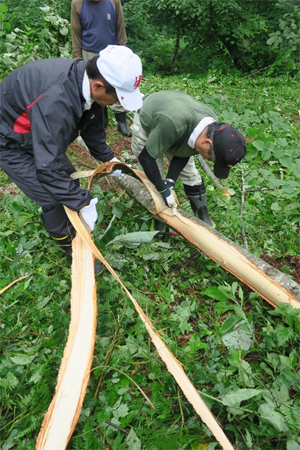 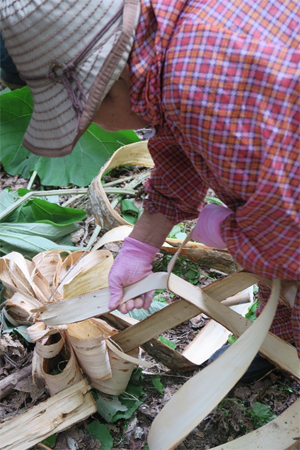 The Department of Intangible Cultural Heritage has been researching folk techniques using wooden materials. As part of this research, we have conducted a field study on barking to manufacture fabrics in June 2019.
“Bark fabrics” refer to the cloth woven using yarn made of fiber obtained from the inner bark of trees. In Japan, the Manchurian elm, Japanese lime, Japanese wisteria, Kozo paper mulberry, and East Asian arrowroot etc. are renowned as raw materials. We researched and recorded how to bark the Manchurian elm in the central part of Hokkaido Prefecture on June 15th and the Japanese lime in Sekikawa, Tsuruoka City, Yamagata Prefecture on June 30th.
The traditional fabric of the Ainu, comprising the Manchurian elm called “attus,” and “shinaori,” of Sekikawa comprising the Japanese lime, are designated as traditional crafts by the national government (“Nibutani-attus” and “Uetsu-shinafu”). In this case, the Manchurian elm was barked by the Nibutani Folk Crafts Association, whereas the Japanese lime was barked by the Sekigawa Shinaori Cooperative Association.
These trees are barked from June to early July when they grow by drawing water. Smooth barking is allowed only during this period. Basically, barking is applied to the standing Manchurian elm and the fallen Japanese lime. The bark is separated into outer and inner parts using only hands and simple tools. The inner bark is further processed into water-resistant strong yarn by devoting a considerable deal of time and effort.
To ensure efficient and sustainable use of natural materials, people have accumulated knowledge and techniques by deepening their understanding and increasing their experience over a long period of time. You can find some of the human interaction with nature through folk technologies that target natural materials.

Survey of the Restoration Technique for Hikiyama Metalwork in Shiga Prefecture Metalwork removed from the float for restoration (shaft-point metalwork). The completed boat and the Project members The launch ceremony also featured the rite of “funa-kabuse,” in which the boat is capsized three times to pray for its safety on the water.

The “Cormorant Fishing Boat Project,” which has been underway at the Gifu Academy of Forest Science and Culture from May 22, has been successfully completed. The 13-meter-long cormorant boat was displayed at a launch ceremony on July 22.
The aim of this Project was to record and inherit boat-building techniques while actually engaging in building a cormorant boat, with the participation of American boat builder Douglas Brooks, under the guidance of boat builder Seiichi Nasu (86) of Mino City, Gifu Prefecture (also refer to our May 2017 Activities Report). Also participating were American naval architect Marc Bauer and Gifu Academy furniture student Satoshi Koyama. The boat-building process was open to the public in the shelter structure built within the Academy premises. Tobunken served in the roles of research and documentation, taking video records of virtually the entire building process. Going forward, we will be editing and assembling the records in a way that will be useful for acquiring the necessary building techniques, and plan to co-author written and video reports with Mr. Brooks by the end of the next fiscal year.
While the Project itself has come to a conclusion, the utilization, transmission, and dissemination of cormorant boats and their building techniques will continue across many fields. The cormorant boat built in the Project will be purchased by Yui no Fune, an organization that offers guided boat tours of Nagara River, and will be used to introduce river boat culture to the general public. Meanwhile, at Gifu Academy, work is underway to explore how smaller, more manageable boats can be made using the traditional techniques learned in the Project. Since techniques will not be handed down if there is no demand for them, there is a need for flexible thinking to devise boats that meet contemporary needs and interests.
The transmission of living techniques requires not only the compilation of academic records but also efforts to utilize them in contemporary ways and to make them more widely known to the general public. Tobunken intends to continue working with organizations and experts in a wide range of disciplines to explore better ways of transmitting these techniques. Having a discussion while watching the recorded video

On February 22nd, 2016, the Department of Intangible Cultural Heritage held a study meeting titled “Production of Recorded Videos for Intangible Cultural Properties,” where Takeshi ABE (Tohoku Institute of Filmed Cultural Properties) was invited as a guest speaker. He has been engaged in production of recorded videos for intangible cultural properties of Iwate Prefecture in Tohoku District. The meeting was held as one of the efforts of the “preparation of dynamic records for cultural properties protection” project that was governed by the National Research Institute for Cultural Properties, Tokyo as a part of the promotion program of the National Taskforce for the Japanese Cultural Heritage Disaster Risk Mitigation Network under the National Institutes for Cultural Heritage.
In this meeting, the current state of folk performing art in the disaster-affected areas was reported based on the activities of Mr. Abe in Iwate Prefecture after the Great East Japan Earthquake and a discussion was held on how to utilize the recorded video for disaster prevention and mitigation.
Today, due to the development of digital equipment, ordinary people who are not professional photographer can easily take moving pictures and a possibility to accept those pictures as a part of the records in a flexible manner was also discussed.
The Department of Intangible Cultural Heritage held the Sub-conference on Video Recording of Intangible Fork Cultural Properties over the years from 2003 to 2007. Based on what was discussed there, the Conference on the Study of Intangible Fork Culture Properties was heled and relevant reports such as “Guidance on the production of recorded videos for intangible fork cultural properties” have been published. Based on the discussions held so far, it is considered necessary to address new challenges that have arisen and also to include intangible traditional techniques in local areas into our continuing discussion in the future meetings on production of recorded videos.