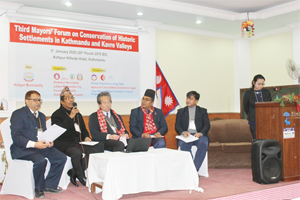 As part of the above-mentioned project commissioned by the Agency for Cultural Affairs, Tokyo National Research Institute for Cultural Properties (TNRICP) continues to support the building of an administrative network to conserve historic settlements in Nepal. On September 23rd and December 1st, 2019, workshops were organized in Kirtipur municipality with participation of engineers in charge of conservation of historic settlements from relevant municipalities. In response to their outcomes, “the third Mayors’ Forum on Conservation of Historic Settlements in Kathmandu and Kavre Valley” was held on January 5th, 2020, under the joint auspices of Kirtipur municipality and TNRICP.
The first Mayors’ Forum was held in 2018 in Panauti municipality for sharing the initiatives and issues related to preservation of historic settlements among the municipalities, followed by Lalitpur Metropolitan City in 2019.
Kirtipur municipality, whose old city area known as “a medieval settlement in Kirtipur” was listed as a UNESCO tentative list for World Heritage site, has been working on establishing its own rules for conservation. Therefore, the theme of this Forum was set as “regulatory framework for conservation of historic settlements,” and through two engineer workshops, the current issues pertaining to the systems were clarified and discussed while sharing information. As a result, the following were spotlighted as issues of administrative organizations and such systems: the existing framework for preservation of historic settlements is not effective since the policy for protection of cultural heritage of monumental nature is not linked with that for urban planning under national administration; some pioneering municipalities preserve their streetscapes under their original regulations, while others are formulating their regulations or criteria by focusing on completely different issues in municipal administration.
Accordingly, at the Forum, an officer in charge of national policy to protect cultural heritage and the one for urban planning reported about their respective conservation systems, and engineers from five municipalities delivered presentations on their legislation and issues to mutually share the tasks under national and municipal administration. Professor NISHIMURA Yukio of Kobe Design University gave a keynote speech titled “Effective Integration between Methods of Urban Planning and Preservation of Historic Settlements” while KANAI Ken, Head of the Conservation Design Section of the Institute, introduced some case studies on the Japanese system for important preservation districts of historic buildings. The Forum was attended by around 120 people, including State Minister of Urban Planning, five mayors and four deputy mayors, as well as engineers and researchers, who proactively exchanged opinions at the end.
Each municipality has several issues on conservation of historic settlements due to lack of financial and human resources, without sufficient support from the national government. Another reason for the ineffective functioning of the existing systems is insufficient basic research on historic settlements or lack of cooperative systems involving researchers and experts.
Consideration to lay the foundation to operate the network for conservation of historic settlements involving research institutions has just begun. It is anticipated that the autonomous and continuous cooperation among the persons concerned is strengthened to achieve a better environment around the historic settlements as well as its preservation.