Formation Process of Namban Lacquer and Its Dating: Seminar Held by the Department of Art Research, Archives and Information Systems 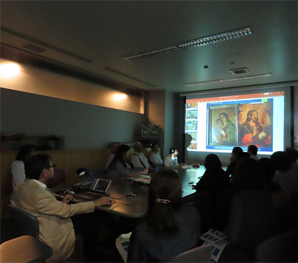 At the 6th Seminar held by the Department of Art Research, Archives and Information Systems on September 24th, 2019, KOBAYASHI Koji, Head of the Trans-Disciplinary Research Section, delivered a presentation titled “Formation Process of Namban Lacquer and Its Dating – Examination Especially Focusing on Christian Portable Oratory.”
There is no consensus on when and how Namban lacquer, which was produced in Kyoto and exported mainly to Europe and America in the early 17th century, started to be utilized. So far, among portable oratories, in which Christian sacred paintings are placed, much attention has been paid only to the ones produced as Namban lacquer. The presenter comprehensively examined the portable oratories produced for Japanese Christians as well, which continued to be handed down to this day in the Sendaiji and Shimo-otowa areas in Ibaraki City, Osaka, well-known as settlements of crypto-Christians; these oratories include the one owned by the General Library of the University of Tokyo, which has a the painting of Christ by NIWA Jacob, who learned painting in seminary in Japan, in addition to the Namban lacquer portable oratories scattered around the world. Among them, a group of oratories without decorative pattern on metal fittings were extracted and compared with a makie decorated Chinese-style chest owned by Toyokuni Shrine, with a miniature shrine ornamented by Namban lacquer patterns of Kodaiji-style makie and raden decoration made for a statue of TOYOTOMI Hideyoshi possessed by Richi-in Temple in Misaki Town, with a relatively older makie shelf having metal fittings, and others. As a result, the presenter concluded that the oratories with no decorative metal fittings are the oldest, estimated to have been produced between the latest 16th century and the earliest 17th century.
This dating of older oratories matches the presenter’s dating of Namban lacquer lectern, which had been estimated to be produced from the early 17th century, i.e., a little later than oratories.
The examination was aimed at exploring the formation process and dating of Namban lacquer. If these results are accepted, it might become a catalyst for reconsideration of various issues involving painters or production areas of sacred paintings and frames placed in the portable oratories, on the reality of Christianity and trade in Japan around the early 17th century as well as the relations between TOYOTOMI Hideyoshi /the Tokugawa shogunate and the Anti-Christian Edicts/Christian missions.
At the seminar attended by Dr. TAKEDA Eri, a restorer of Western early paintings, Professor KOIKE Tomio from Tsurumi University, and many other researchers in related fields from the art museums organizing exhibitions of lacquerware from the Momoyama period, lively discussions were held on diverse topics, right from methodology to various other aspects.