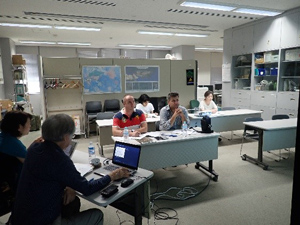 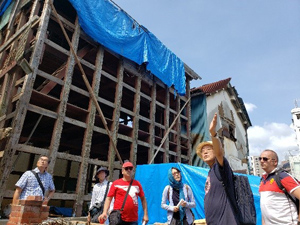 A civil war broke out in Syria eight years ago in March 2011, and it seems there is no end in sight. Apart from the human cost of war, the much precious cultural heritage was also lost.
The Japanese government and the United Nations Development Programme (UNDP) began providing cultural heritage aid to Syria in 2017. From February 2018, the Archaeological Institute of Kashihara, Nara Prefecture, in association with academic organizations such as the University of Tsukuba, Teikyo University, Waseda University, Chubu University, and the Ancient Orient Museum, has been accepting Syrian specialists and providing them training in the fields of archeology and restoration. Tokyo National Research Institute for Cultural Properties is also participating in this project.
Following training seminars on conservation and restoration of paper cultural properties held in May 2018, this year, two Syrian specialists were invited to undergo training in “Research Planning Methods to Restore Historical Cities and Buildings” conducted from July 24th to August 6th.
Many historical cities such as the ancient city of Aleppo were engulfed in war, and many historical buildings were devastated. In the first half of this year’s training, seven specialists gave classroom lectures on surveying damage to historical buildings and making emergency repairs, structural safety diagnosis method, documentation and database creation method, restoration plan creation method, and restoration and preservation system creation method. For the practical aspect that comprised the second half of the training, participants inspected the restoration status of historical buildings and townscapes devastated by the 2016 Kumamoto Earthquakes, including Kumamoto Castle, the Shinmachi-Furumachi District, Kumamoto University, and the Eto-yashiki (Eto estate), which is registered as an important cultural property.
The participants also heard stories told by the people in charge. They visited Preservation Districts for Groups of Traditional Buildings in Kyoto and Nara and saw examples of repairs and applications of historical Japanese buildings.
We would once again like to thank the specialists, related organizations, and personnel-in-charge for their support.
Tokyo National Research Institute for Cultural Properties plans to continue support activities for Syrian cultural heritage in the future.