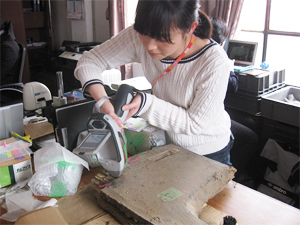 Investigating a sample from target building 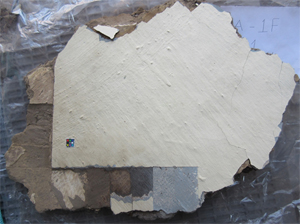 As part of this project commissioned by the Agency for Cultural Affairs of the Japanese Government, a compositional analysis of the finishing layer of a group of buildings adjacent to Aganchen Temple at Hanumandhoka Palace, Kathmandu, was performed using an X-ray fluorescence spectrometer, etc., from February 22nd to 28th, 2019, with permission from the Department of Archaeology, Government of Nepal.
On-site surveys conducted so far have revealed that a number of extensions and structural alterations had been made to these buildings. In particular, the wall finish recoating history and the remaining finishing layers at hidden areas of retrofitted support members are important clue in learning about the changes to the buildings. Study on the specifications and coloring of each recoated layer has continued.
This time, the composing materials of the finishing layers were identified in order to understand how specifications changed according to the times, and a scientific analysis was performed using an X-ray fluorescence spectrometer and a Raman spectrometry system to examine the history of extensions and structural alterations.
A fragment of the finishing layers investigated comprised a maximum of 10 different sets of layers. Surface and undercoat layers from each period were carved out in tiers and analyzed.
Red iron oxide and minute amounts of gold were confirmed in red-colored areas of the old mural painting layer, and a spectrum quite similar to lapis lazuli was derived from the sky-blue finishing layer recoated in later years. While a detailed analysis of the derived data has yet to be performed, it can be inferred from the use of such precious materials that these buildings had continued to be used as important ritual or residential spaces for a royal family since their initial construction in the 17th century.
In the process of surveying the remains, a mural painting was discovered behind the extended wall section, and it is possible that this mural dates back to a period just after the original construction of the building. Further surveys, including through scientific methods, such as the one used this time, and studies of appropriate preservation measures are still needed.
Hereafter, we will continue to elucidate the history concealed in the buildings themselves, and while preserving such significant material evidence, we will consider how to go about restoring these buildings in association with the Nepalese counterpart.