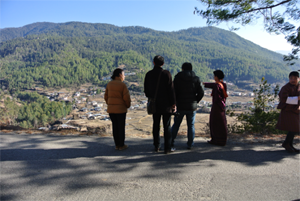 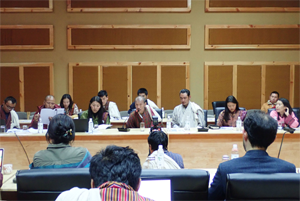 From this Fiscal Year, Tokyo National Research Institute for Cultural Properties (TNRICP) has started an Exchange Project for International Cooperation in Cultural Heritage commissioned by the Agency for Cultural Affairs to provide technical support and capacity building for the preservation and utilization of historic buildings in Bhutan. In 16th January 2020, as part of this project, TNRICP dispatched a team of six experts including three outside experts to participate the Workshop on Conservation of Lham Pelzom house organized by the Division for Conservation of Heritage Sites (DCHS), Department of Culture, Ministry of Home and Culture Affairs.
Lham Pelzom house, located in Kabesa near the capital of Thimphu, is considered to be one of the oldest surviving farmhouses in the country, and is the top candidate for designation as historic farmhouses under Bhutan’s first comprehensive basic law on cultural heritage (New Law) which the government aims to pass. On the other hand, the house has been vacant for a long time, and its deterioration has been remarkable recently. Consequently, the need for preliminary consensus among stakeholders, such as the government, owners and local communities, on the potential for preservation and utilization is growing. Given this awareness, DCHS invited house owners, representatives of local communities, government officials from the Ministry of Work and Human Settlements, and Tourism Council to the workshop, for sharing various views on the conservation of the Lham Pelzom house. TNRICP joined the workshop for giving advice from the theoretical and technical point of view regarding heritage conservation.
In the first half of the workshop, from the standpoint of promoting heritage protection, TNRICP proposed conservation policies and restoration methods based on field research, and DCHS reported on how government support should be provided, including financial aspects. Contrary, from the standpoint of the bearer of actual preservation, house owners strongly requested the need to secure economic benefits through common adaptive use, and local communities emphasized the need for the active involvement of the government in preservation. However, they all understood and welcomed a high reputation as a cultural heritage in general. Subsequently, in the second half of the workshop, meaningful mutual discussions unfolded in the latter half of the workshop, based on opinions, aspirations, and grievances of each participant in the first half. Finally, participants agreed to promote the conservation of Lham Pelzom house as the following conditions.
(1) ACCELERATE procedures for value valuation as cultural heritage, such as designation under the new law,
(2) CLARIFY protection frameworks, including administrative support for restoration works and the house owner’s obligations to the preservation,
(3) CONSIDER a proposal for utilization that is appropriate as a cultural heritage and takes into account the house owner’s demand.
TNRICP will cooperate with DCHS and continue research activities and field surveys to realize the conservation of traditional farmhouses in Bhutan as cultural heritage. 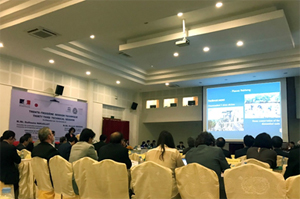 A scene from the ICC meeting 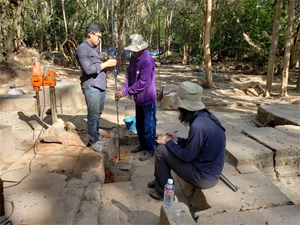 Tokyo National Research Institute for Cultural Properties has been providing technical support to the Authority for the Protection and Management of Angkor and the Region of Siem Reap (APSARA) for the conservation and sustainable development of the ruins of Ta Nei Temple in Angkor, Cambodia. TNRICP dispatched a total of six members including outside experts to Cambodia from December 1st to 21st, 2019 in order to report the progress of dismantling the East Gate of the temple at the meeting of the International Co-ordinating Committee for the Safeguarding and Development of the Historic Site of Angkor (ICC), and investigate causes of uneven subsidence at the basement and floor of the East Gate.
At theICC meeting at the APSARA headquarters office on December 10th and 11th, we delivered a report in association with Mr. Sea Sophearun from APSARA. Approval was granted to proceed with the conservation work further while utilizing the results of the dismantling survey, including a site visit by four specialized members of the committee. We also collected the latest information by exchanging opinions with persons in charge from APSARA, as well as experts within and outside Cambodia.
To investigate the causes of uneven subsidence, we analyzed the old ground surface, and dug the southeast and northwest internal corners till the bottom of the stone foundation to check the condition of the East Gate base. This confirmed that the East Gate basement was made of roughly formed sandstone exterior, laterite groundwork, and internal landfill. It was also determined that the entire  basement structure was built on a manmade soil layer using fine grains of sand. This sand layer seems to be the one that lends stability to the foundation on which the building was constructed. Similar techniques can been observed at other temple ruins in Angkor.
After partially removing the floor pavement stone blocks, the bearing capacity of the foundation landfill was investigated with a dynamic cone penetration testing device in cooperation with Professor Dr. KUWANO Reiko from the Institute of Industrial Science, the University of Tokyo. The testing disclosed that the fragility of laterite used as base layer of the floor pavement and the strength of foundation landfill differed by location. This could be one of the causes of uneven subsidence.
Based on the outcomes of this survey, we will examine how to improve the basement structure to ensure complete restoration of the East Gate.

Seminar III on Environmental Management at Museums for Iranian Researchers 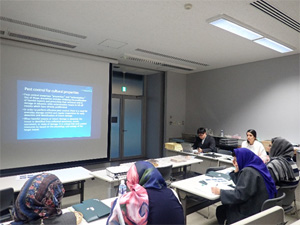 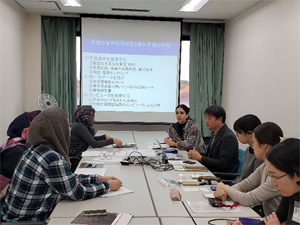 Lecture at the National Museum of Ethnology

In March 2017, Tokyo National Research Institute for Cultural Properties exchanged a letter of intent with the Iranian Cultural Heritage, Handicrafts and Tourism Organization (ICHHTO) and the Research Institute of Cultural Heritage and Tourism (RICHT) to offer its cooperation in various academic fields for the protection of Iranian cultural heritage over the next five years.
During the survey to explore the partner country’s needs conducted in Iran in October 2016, Iranian experts consulted us about the serious air pollution in the capital city of Tehran that resulted in damage to cultural properties. They said that even metal products displayed and housed in the National Museum of Iran might be eroding. Based on this information, we have been conducting seminars regarding the improvement of display and housing environment at Iranian museums since 2017.
In 2019, we invited four researchers, two from RICHT and two from the National Museum of Iran, to Japan for a seminar from November 25th to 29th.
First, lectures on museum environments were delivered at the Institute and were mostly led by SANO Chie, Director, Center for Conservation Science, and Dr. RO Toshitami, in addition to the presentation of a report on the results of air pollution monitoring conducted at the National Museum of Iran in 2018. The lectures on pest control for cultural properties were mostly led by SATO Yoshinori, Head, Biological Science Section, and Associate Fellow KOMINE Yukio.
After the academic program, we visited the Kyoto National Museum and the National Museum of Ethnology. At the Kyoto National Museum, Dr. FURIHATA Junko delivered a lecture on disaster prevention measures before observing the disaster prevention system. At the National Museum of Ethnology, Dr. HIDAKA Shingo, Ms. WADAKA Tomomi, Ms. KAWAMURA Yukako, and Ms. HASHIMOTO Sachi conducted lectures on environmental management, air conditioning, pest control measures, and so on, while taking a tour of the exhibition halls and storage area. Once again, we express our gratitude to all the people and the institutes that have cooperated to support the program.
The Institute will continue to offer its cooperation in various fields for the protection of Iranian cultural heritage. 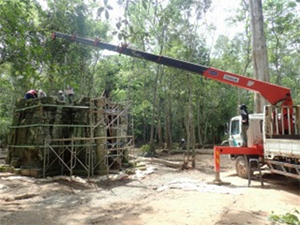 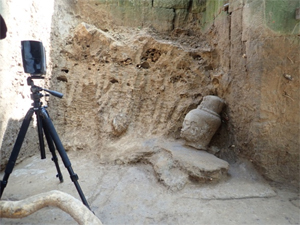