The Friendship between KURODA Seiki and KUME Keiichiro – The 7th Seminar Held by the Department of Art Research, Archives and Information Systems 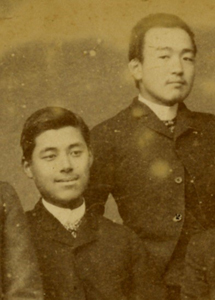 KUME Keiichiro (left) and KURODA Seiki during their study in France 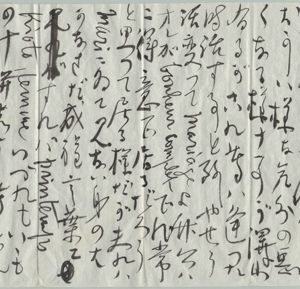 Part of the letter written to KUME Kei-ichiro by KURODA Seiki dated on April 1st, 1895, which includes the view of marriage expressed partially in French by him right after his marriage

KURODA Seiki (1866-1924) and KUME Keiichiro (1866-1934), who learned oil painting from Raphael COLLIN––an academic painter in France––were close friends and shared an atelier. After returning to Japan, they founded a new fine art association named Hakubakai. Through their involvement in art education and administration, they endeavored to innovate and develop the sphere of Japanese oil painting.
The Kume Museum of Art, which owns and publishes the works and materials of KUME Keiichiro, and Tokyo National Research Institute for Cultural Properties, which was founded with the inheritance of KURODA Seiki, began joint research in 2016 in order to investigate the materials pertaining to their friendship. The letters exchanged between them particularly attract attention as materials that illustrate their social and professional friendship. The 7th seminar titled “Reading the Letters Written by KURODA Seiki and KUME Keiichiro” was organized by the Department of Art Research, Archives and Information Systems on December 10th, 2019. SHIOYA Jun of the Institute delivered a presentation regarding the letters written to Kume by Kuroda, while Ms. ITO Fumiko of the Kume Museum of Art addressed the letters written to Kuroda by Kume.
The letters investigated by this research were written from the 1890s until 1925, after they returned to Japan from France. They wrote not in the epistolary style used generally at that time, but in a colloquial style to report their productions’ progress and their travel impressions. They occasionally wrote in French to secretly pour forth their feelings. In 1910 and 1911, Kume visited the UK to do clerical work for the association for exhibits for the Japan-British Exhibition. The letters written during the period¬¬––in which he detailed the exhibition, the reunion with Mr. Collin, and interaction with local painters––represent the network of oil painters of that time.
After the presentation, two Visiting Researchers who helped us reprint the letters, Mr. TANAKA Jun and Mr. SAITO Tatsuya, joined the opinion exchange. We will release the outcomes of this research in “The Journal of Art Studies,” which will be published in the next fiscal year.