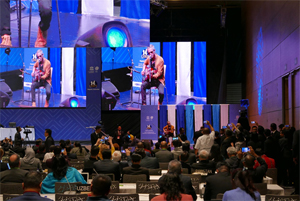 A live performance of “Music and dance of Dominican Bachata” (Dominican Republic), which was inscribed on the Representative List

The fourteenth session of the Intergovernmental Committee for the Safeguarding of the Intangible Cultural Heritage took place in Bogota, the capital of Columbia, from December 9th to 14th, 2019. Two researchers from this Institute attended the session.
At the session, Japanese elements were not discussed, but the Committee inscribed five on the List of Intangible Cultural Heritage in Need of Urgent Safeguarding and 35 on the Representative List of the Intangible Cultural Heritage of Humanity. The Committee also added two projects to the Register of Good Safeguarding Practices. Among the elements inscribed on the Representative List are “Music and dance of Dominican Bachata” (Dominican Republic), “Nuad Thai, traditional Thai massage” (Thailand), and “Ie Samoa, fine mat and its cultural value” (Samoa). In particular, “Safeguarding strategy of traditional crafts for peace building” (Colombia), which was also added to the Good Practices, attracted global attention. As a good model, the strategy shows that intangible cultural heritage plays an active role in recovering from the devastation of long battles with drug syndicates.
In a first, the Committee decided to remove one element, “Aalst Carnival” (Belgium), from the Representative List. The reason for that was the recurrence of anti-Semitic and Nazi representations on the carnival floats, which was not stopped on the grounds of “freedom of expression” despite protests and objections from various quarters. This is incompatible with the fundamental principles of the 2003 Convention for the Safeguarding of the  Intangible Cultural Heritage, thereby non-conforming with the inscription criteria. The global community expressed its intention to not allow any forms of discrimination, even in cultural activities or practices.
Intangible cultural heritage may give courage and pride to people, promoting dialogue between peoples of different cultural backgrounds, while it may also highlight the cultural superiority of one side, denying or excluding people on the other side. We feel that it is the responsibility of us experts to blow a whistle against political use of intangible cultural heritage while promoting its use for peacekeeping and mutual understanding.