The 14th Conference on the Study of Intangible Folk Cultural Properties 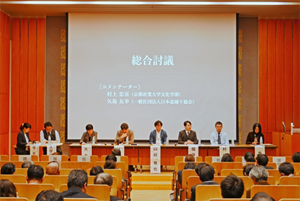 A scene from the comprehensive discussion

On December 20th, 2019, the 14th Conference on the Study of Intangible Folk Cultural Properties was held on the topic “Towards the new utilization of intangible cultural heritages.” The meeting attracted about 170 participants including government officials, researchers, and representatives of conservation groups.
Due to the amendment of the Act on Protection of Cultural Properties, the utilization of properties is expected to increase., many cultural programs featuring intangible cultural heritage are planned or have been implemented for the Tokyo Olympic and Paralympic Games in 2020. However, there is room for discussion on how to utilize such properties and whether they should be utilized or not in the first place has not been discussed thoroughly. Leaving many properties vulnerable to total demise, a new way to make good use of them for inheritance is sought.
The meeting featured four presenters in different positions from various regions. With specific examples, they reported the utilization through existing systems such as the hometown tax system and programs on traditional culture for parents and children, utilization by building an inter-regional network, and utilization for the purpose of transmitting attractive features of the heritage to the public via multimedia. This was followed by a vigorous and comprehensive discussion by the presenters and two commentators.
This conference will be published in March 2020, and they will be available on the website of the Department of Intangible Cultural Heritage.