The Fourth “Workshop on Winnowing Baskets” 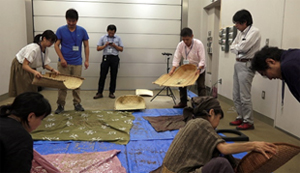 On September 23rd, 2019, the fourth “Workshop on Winnowing Baskets” took place for interested persons at Tokyo National Research Institute for Cultural Properties.
The series of workshops aims to research the techniques and cultures involved in “winnowing baskets” as folkcraft articles, used for screening and carrying threshed grains, considering the inheritance of them to be important. Originating in the “Summit Conference on Winnowing Baskets – Discussion of Weaving Techniques” held here in 2017, the workshop was organized by those who are interested in winnowing baskets, such as specialists in folk studies, archaeology, design engineering, and botany, as well as craftsman, sellers, and users of winnowing baskets and other handicrafts. We have been sharing our research outcomes and issues through the workshop held almost biannually.
For the fourth workshop, winnowing experiments were conducted with baskets produced in various areas, in addition to the research reports. Wheat, rice, and perilla were screened with winnowing baskets named Omogishi (Iwate Pref.), Oidara (Akita Pref.), Kizumi (Chiba Pref.), Ronden/Kumanashi (Toyama Pref.), Awa (Tokushima Pref.), and Hioki (Kagoshima Pref.) (production techniques for Oidara, Kizumi, and Ronden/Kumanashi ones are designated as national intangible folk cultural properties), in addition to Chinese willow ones, Korean wickerwork ones, and Malaysian ones. Actual comparison between these baskets allowed us to deepen the understanding of their functions and arrive at a basic date to verify the significance of their individual shaping and material selection as well as the differences in user-friendliness (functionality) according to areas.
The workshop will enhance studies on winnowing baskets produced in a variety of areas and reflect on the inheritance of their production techniques and cultures of usage together with their craftsman and sellers.