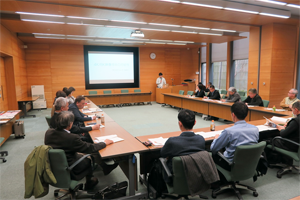 The 2nd study meeting titled “Production of Visual Documentation for Intangible Cultural Heritage” was held on February 22nd, 2019.
Many intangible cultural heritages are predicated on intangible human “techniques.” In addition to written records, video records serve an important role in recording these “techniques.” The issue then becomes what kind of video recordings should be created.
The Department of Intangible Cultural Heritage, Tokyo National Research Institute for Cultural Properties held the Sub-conference on Video Recording of Intangible Folk Cultural Properties from 2003 to 2007, and the results were released in the “Guidance on the production of recorded videos for intangible folk cultural properties.” However, in recent years, the video industry has undergone marked changes, particularly in the development of digital equipment, so there are expectations that the content be updated. Although the aforementioned guidance was created mainly for the video recording of folk art, there are expectations for it to be applied toward other types of intangible cultural heritage such as craft skills and folk techniques.
Thus, with the intention of creating a new “Handbook for the production of visual documentation for intangible cultural heritage,” the Institute convened a study meeting titled “Production of Visual Documentation for Intangible Cultural Heritage” from 2018 to consider the content. This study meeting is the second one convened.
In the first half of the meeting, an expert Hirohito KANAMORI (Over4K Ltd.) spoke on 4K/8K video technology, which has been attracting attention in recent years. He discussed the possibilities for this technology, and its application toward the recording of cultural properties and heritage. As 4K/8K technology will improve the color reproducibility (i.e., color gamut and brightness) as well as high definition images, there is significance for this technology in recording cultural properties.
In the latter half of the meeting, participants discussed the contents of the “Handbook for the production of visual documentation for intangible cultural heritage” by chapter. Participants made various proposals that included keeping in mind that the record creation method will differ depending on the type of intangible cultural heritage and to also take heed of preserving and applying video record media taken in the past (film or electromagnetic tape, etc.) The Institute will refer to these opinions in creating the “Handbook for the production of visual documentation for intangible cultural heritage.”