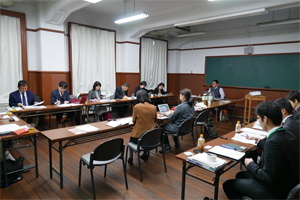 The Liaison Council for “Disaster Prevention of Intangible Culture Heritage” for the Kansai Area was held on February 3rd, 2019 as part of the “Project to Build a Comprehensive Database for Cultural Assets and Establish a Network.” This project is an initiative undertaken by the Department of Intangible Cultural Heritage and the Department of Art Research, Archives and Information Systems as part of the promotion program of the National Taskforce for the Japanese Cultural Heritage Disaster Risk Mitigation Network (Agency for Cultural Affairs’ subsidized project). This council has been ongoing since 2016 for sharing information among nationwide prefectural representatives responsible for folk cultural properties.
This council was co-organized by the Kyoto Art Center in Kyoto City where representatives from six prefectures and one city in the Kansai Area assembled. Representatives from the Department of Intangible Cultural Heritage of Tokyo National Research Institute for Cultural Properties (TNRICP), included Hiromichi KUBOTA, Megumi MAEHARA, Tomo ISHIMURA, and Riyo KIKUCHI.
At the council, participants shared their opinions on the significance of creating a database, and gave presentations on the current state of intangible cultural assets in their respective prefectures. Issues ranging from natural disasters, the various risks that intangible cultural assets face to transmitting preservation techniques and applications were discussed. The current state of intangible cultural assets and issues in each region were shared as valuable information.
On March 1st, a second council was held at TNRICP with participation from the representatives of 10 prefectures.